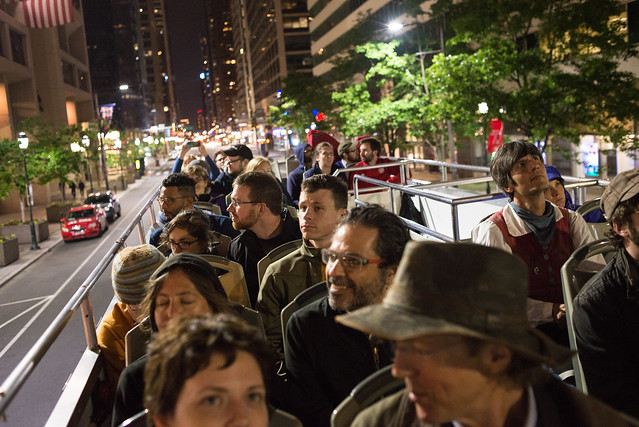 Jesse Sparhawk is a multi-instrumentalist, composer, and improviser whose instruments include harp, guitar, and electric bass. He studied harp with principal harpist of the New York Philharmonic, Myor Rosen and Eastman School of Music’s Kathleen Bride between the ages of 10 and 17 and performed at New York City’s Carnegie Hall at the age of 15. He has nearly 60 independent recording credits to his name performing various instruments.

He has toured the US and Europe as a solo artist, and with several singer-songwriters and bands including Larkin Grimm, Fern Knight, The Valerie Project, Timesbold, Marissa Nadler, and Greg Weeks.

He will performing a solo harp set on the bus.

Jeremy Toussaint-Baptiste is a performer, composer, and commercial independent contractor. His work, through the lens of precarious labor, complicates notions of industry, identity, and environment and the implications of the intersections of such phenomena. He is a founding member of performance collective, Wildcat!, and frequently collaborates with performers and fine artists, often under the alias CROWNS. He has presented work at the Brooklyn Museum, The Public Theater, The Studio Museum In Harlem, American Realness at Abrons, FringeArts, Judson Church, Arts East New York, JACK, University Settlement, Harlem Stage, as well as on Dazed Digital and Complex.com.